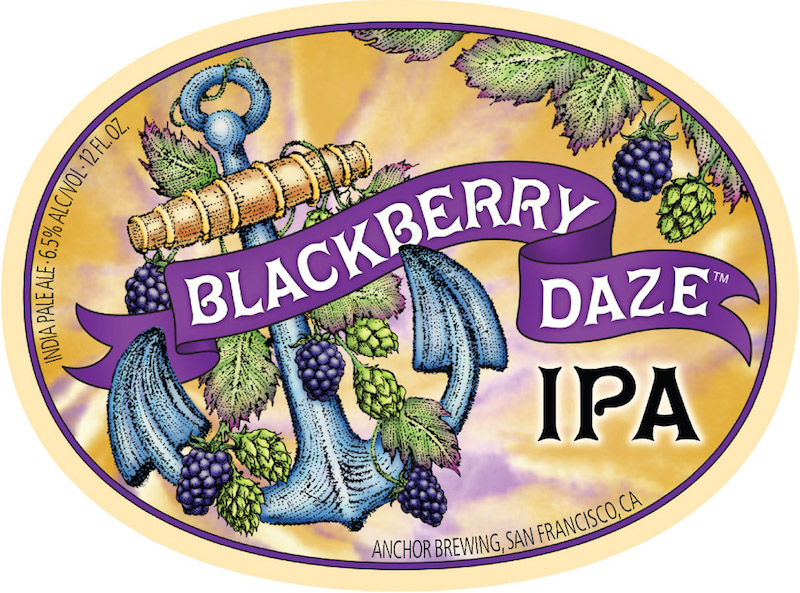 Because the blackberry was once wildly rampant in California, it is our ideal choice for this singular Anchor brew. Blackberry Daze IPA (6.5% ABV) gets its hop bitterness and some hop aroma in the brewhouse, but most of the action happens in the cellar when the fruit is added during secondary fermentation. A special blend of loamy, herbaceous hops for dry-hopping complements the brightness and deep complexity of the blackberries. The result is a funky synthesis of rich earth and ripe fruit, hop bitterness and blackberry tartness, with alluring color and aromas up front, sublimely intense flavors, and a refreshingly dry finish.

“Blackberry Daze IPA is a natural continuum to our growing list of beers made with fruit,” said Anchor Brewmaster Scott Ungermann. “When using fruit in an IPA, we want something that stands up to and also pairs nicely with the hops. Blackberries uniquely compliment the hops, rather than contrast with them. We add some fruit to the brewkettle towards the end of the boil, giving the beer a nice berry jam aroma. Then we add fresh berries in the cellar, imparting a sharp tartness that compliments the beer’s hoppy flavors. The result is an IPA with upfront bitterness that’s countered by tartness and slight sweetness from the berries, creating a play between tart, sweet, and bitter.”

The appearance of Blackberry Daze IPA is unique and unexpected as it features a ruby, blush pink color not found in your typical IPA. The packaging artwork displays a psychedelic label design that visually reiterates the beer’s alluring combination of hops and blackberries.

Blackberry Daze IPA is available starting in February 2017 in 6-pack bottles and on draught at select bars, restaurants, and stores as well as at the Anchor Brewing Taproom in San Francisco. You can find a brew near you by using the Anchor Beer Finder.

Learn more about Anchor Brewing at www.anchorbrewing.com and follow @anchorbrewing on social media.