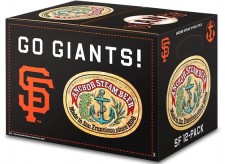 With specially designed packaging, the commemorative Anchor Steam SF Giants 12-Pack features the team’s colors and logo along with brews and baseball history notes printed on an interior flap.  Fans can cut along the sides of the box for instant signs to cheer on their team during games.

The Anchor Steam SF Giants 12-pack is available now and throughout the season while supplies last at select retailers throughout Northern California, Nevada, southern Oregon, and Hawaii.

In conjunction with the 12-Pack, Anchor Brewing has also announced a limited-time sweepstakes.  Anchor Brewing and SF Giants fans can enter the sweepstakes by visiting their local retailers to find specially marked 12-packs. There are over 1,000 prizes including a visit to the newly created Anchor Suite at AT&T Park to watch the Giants play, 50 pairs of Giants tickets, and 1,000 VIP tours of the Anchor Brewery in San Francisco.

The sweepstakes is currently available to California residents 21 and over who enter between March 30th and June 30th, 2014.

In recent years, Anchor Brewing has partnered with two-time World Series Champions, the San Francisco Giants on various projects. Together these iconic San Francisco institutions created Anchor Plaza and Taproom at AT&T Park which serves a selection of Anchor beers including:  Anchor Steam®, Liberty Ale®, and Anchor California Lager®. The partnership was recently renewed through the 2017 season and expanded to include the introduction of an Anchor Brewing suite experience at AT&T Park, as well as the Anchor Corral at Scottsdale Stadium, the Spring Training home of the Giants. Most recently, Anchor Brewing teamed up with the Giants and Mayor Edwin Lee to announce plans to construct a world-class facility at Pier 48 as part of the Mission Rock Development Project.

Anchor Brewing’s video tribute to San Francisco’s rich brews and baseball tradition can be viewed by visiting Brews and Baseball.

Anchor Brewing Company’s roots date back to the California gold rush making it one of America’s oldest breweries. Its Anchor Steam® Beer is San Francisco’s original since 1896. In 1965, Fritz Maytag acquired and revived the struggling brewery at a time when mass production of beer dominated and seemed unstoppable. Maytag started a revolution in beer that originated today’s craft beer movement. An undisputed icon, Anchor is America’s first craft brewery where beers are handmade in our traditional copper brewhouse from an all-malt mash. At Anchor, we practice the time-honored art of classical brewing, employing state-of-the-art methods to ensure that our beers are always pure and fresh. We know of no brewery in the world that matches our efforts to combine traditional, natural brewing with such carefully applied, modern methods of sanitation, finishing, packaging and transporting.  See what we are brewing today at www.anchorbrewing.com.

About the San Francisco Giants

One of the oldest franchises in Major League Baseball, the 132-year old franchise moved to San Francisco from New York in 1958.  After playing a total of 42 years in Seals Stadium and Candlestick Park, the team moved to the privately constructed AT&T Park in 2000.  The organization is widely recognized for its innovative business practices and baseball excellence.  In 2010, the franchise was named the Sports Organization of the Year by Street & Smith’s Sports Business Journal and in 2012 was named Organization of the Year by Baseball America.

Since opening its gates, AT&T Park has become internationally-renowned as a premier venue in the world of both sports and entertainment.  On the diamond, more than 43 million spectators have witnessed a number of magical moments, including two World Series Championships (2010 & 2012) and five playoff appearances.  On June 13, 2012, the first-ever Perfect Game was thrown by Giants ace Matt Cain.  In 2008, the Giants celebrated the team’s 50th year in San Francisco and it was the center of the baseball universe when it hosted the 78th Major League Baseball All-Star Game on July 10, 2007.  AT&T Park has also played host to some of music’s biggest acts, including the Rolling Stones, Bruce Springsteen and the E-Street Band and Green Day.

Off the field, the Giants have one of the premier community outreach programs in professional sports, becoming the first team to implement a 100 percent participation program, involving every player, coach and uniformed staff member in at least one community project throughout the season.  Through its community outreach programs, the Giants and the Giants Community Fund work with corporate and non-profit partners to raise awareness, educate and generate interest in a variety of issues important to both their fans and community including education/literacy, violence prevention, health and youth recreation and fitness.