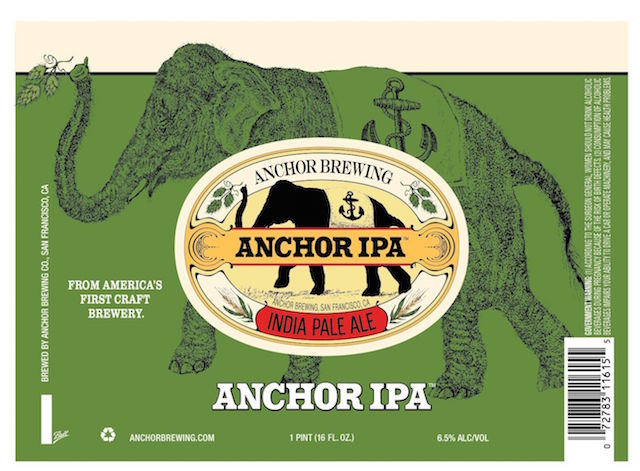 Anchor IPA marks the third beer to be canned by Anchor in the brewery’s 119 years of operation. Anchor first began canning beer with Anchor California Lager® in 2014 followed by the limited release of Brotherhood Steam Beer cans, a collaboration with the band Chris Robinson Brotherhood.

“We are thrilled to finally bring Anchor fans one of their favorite core beers, Anchor IPA, in cans,” said Mark Carpenter, Brewmaster at Anchor Brewing. “When we first released Anchor IPA the popularity of the beer took off quickly, so it only made sense to also offer consumers a convenient way to enjoy this tasty beer. Anchor IPA was brewed in the spirit of adventure, using 6 different hop varieties and 3 types of malt. With this in mind, I encourage beer lovers to grab a can and seek out their own exciting adventure.”

The elephant seen on Anchor IPA cans was hand-drawn by long-time Anchor label artist James Stitt. It was inspired by the expression to “See the Elephant,” a 19th-century metaphor for the hopeful but risky pursuit of happiness, adventure, and fortune. The expression originates from a tale that predates the California Gold Rush. As a result, the elephant became the universal symbol of the Gold Rush, representing the spirit of adventure, as evidenced by the journals, letters, and sketchbooks of the forty-niners hoping to discover their long sought after treasure. Whether or not they struck it rich in the diggings, those plucky pioneers would forever treasure their California adventure as the defining moment of their lives.

Anchor IPA 6-pack cans began shipping nationwide in the beginning of March alongside 6-pack bottles, 12-pack bottles, 22-ounce bottles, and on draught in select restaurants and bars as well as the Anchor Brewing Taproom in San Francisco.

Anchor has partnered with PAWS: Performing Animal Welfare Society (www.pawsweb.org), to feature their rescued Asian Elephants in the making of this video. We are proud to work alongside PAWS and support the nonprofit organization by adopting their five Asian Elephants: Prince, Annie, Gypsy, Nicholas & Wanda, living out their lives in peace at PAWS’ 2,300 acre sanctuary dubbed, ARK 2000.

Note: No human-elephant contact was permitted and the elephant’s cooperation and accommodation of the film crew is on “Elephant” terms. The elephants were not asked to perform specific tasks at the request of the film team. The producer and film crew adapted to the conditions and rules specified by PAWS, its employees and animal caretakers both before and during any photography/filming.

###
Anchor Brewing Company’s roots date back to the California Gold Rush making it one of America’s oldest breweries. Its Anchor Steam® Beer is San Francisco’s original since 1896. In 1965, Fritz Maytag acquired and revived the struggling brewery at a time when mass production of beer dominated and seemed unstoppable. Maytag started a revolution in beer that originated today’s craft beer movement. An undisputed icon, Anchor is America’s first craft brewery where beers are handmade in our traditional copper brewhouse from an all-malt mash. At Anchor, we practice the time-honored art of classical brewing, employing state-of-the-art methods to ensure that our beers are always pure and fresh. We know of no brewery in the world that matches our efforts to combine traditional, natural brewing with such carefully applied, modern methods of sanitation, finishing, packaging and transporting. See what we are brewing today at www.anchorbrewing.com.