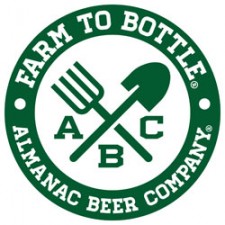 The San Francisco-based pioneer of “farm-to-bottle” brewing continues to expand the accessibility of its hand made beers as part of new distributor’s launch portfolio.

SAN FRANCISCO (Jan. 3, 2013) – Almanac Beer Company, the San Francisco-based pioneer of “farm-to-bottle” brewing, announces the availability of its “California Table Beer Series” in Southern California beginning Jan. 3, 2013. As part of California Craft Distributors’ launch portfolio, Almanac is thrilled to be expanding its distribution outside of the Bay Area and getting its craft beers into the hands of Southern California residents.

Featuring Biere de Chocolat, Honey Saison and Extra Pale Ale, Almanac’s California Table Beer Series is offered in a 12-ounce bottle format, available for purchase year-round in convenient 4-packs at select retail outlets and on draft at many fine Southern California bars and restaurants. In addition, Almanac will bring their “Farm to Barrel” line of barrel-aged beers to Southern California beginning in February 2013.

Pioneering the concept of “farm-to-bottle” brewing, Almanac leverages its close relationships with regional farmers to capture the essence of each season’s harvest to create uniquely Californian beers inspired by historical brewing traditions. Since its inception, Almanac has partnered with a different California family farm to supply select ingredients for each brew. Every release is a collaboration between Almanac and the local terroir.

Almanac’s California Table Beer Series is available in 4-packs of 12-ounce bottles for a suggested retail price of $10.99. The lineup currently consists of a 5.5% ABV Biere de Chocolat, brewed with hand-roasted cocoa nibs from Dandelion Chocolate in San Francisco; a 4.8% ABV Honey Saison, utilizing delicious local honey from Marshall’s Farms in Northern California; and a 6% ABV Extra Pale Ale, a Belgian-inspired brew made with San Joaquin Valley Mandarin oranges from Blossom Bluff Orchards. Each of these beers is brewed with California-grown barley.

“We’re thrilled to grow our distribution into a market that appreciates and supports craft beer,” said Jesse Friedman, co-founder of Almanac. “We hope to continue to expand the accessibility of our offerings to Southern California and beyond with California Craft Distributors. They’ll help us meet the demand for our beers, and do it with genuine respect for the products, and a real focus on customer service for both retailers and breweries alike.”

California Craft Distributors is a boutique distribution company focusing on hand-selling craft beer statewide in California. Every brand represented is hand selected by the co-founders who study and evaluate each product to ensure its taste, quality and consistency within their portfolio.

About Almanac Beer Company: Founded in 2010 by Jesse Friedman and Damian Fagan, Almanac Beer Company is a San Francisco-based microbrewery dedicated to producing farm-to-bottle artisan ales, brewed specifically to complement locally-sourced cuisine prepared with the same care and craft. Pioneering the concept of farm-to-bottle brewing, Almanac leverages its close relationships with regional farmers to capture the essence of California’s diverse agricultural bounty. Each beer is rooted in historical brewing traditions and made uniquely Californian by integrating locally sourced ingredients. Every release is ultimately a collaboration between Almanac and the local terroir. Almanac is a member of the San Francisco Brewers Guild, a non-profit dedicated to reviving the vibrant heritage of beer brewing in San Francisco. For more information, visit www.almanacbeer.com.