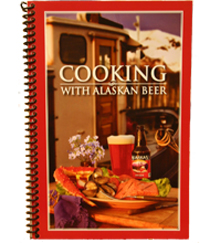 Cooking with Alaskan Beer a compilation of favorite crew recipes

JUNEAU, Alaska – After more than two decades of adding the award-winning flavors of Alaskan Beer to their favorite recipes, Alaskan Brewing Co. is releasing its first cookbook this holiday season. Cooking with Alaskan Beer is a compilation of 101 recipes created and perfected by the employees, family and friends of Alaskan Brewing.

For the last 20 years, Alaskan has hosted a friendly competition known as the Brew Crew and Investor Cook-off. In the early years of the Brewery, the crew and investors decided to celebrate the coming winter season with a potluck and a challenge to create best recipe using an Alaskan beer. As the years passed, friendly rivalries developed and local chefs and food enthusiasts were brought in to judge the recipes.

One of the perennial Cook-Off judges, Stefani “Chef Stef” Marnon, leant her culinary expertise to narrow down and edit the several hundred crew recipes to 101. “We searched through and tested hundreds of creative and delicious recipes to create this collection,” explains Chef Stef. “Which means we have hundreds more to include in future editions.”

The Alaskan Brew Crew got a sneak peak at the cookbook earlier this month at the 2009 Brew Crew & Investor Cook Off. The 115-page collection includes recipes ranging from an Alaskan Amber Poached Salmon and Alaskan Smoked Porter Curried Carrots to the Alaskan Stout Crème Brûlée.

“Seeing our recipes in print was really exciting,” said Alaskan Production Assistant Tom West whose family has several recipes included in Cooking with Alaskan. “It will definitely add a more competitive edge to next year’s Cook-Off.”

Cooking with Alaskan Beer released on November 12 and is available for purchase at the Alaskan Brewery and Hearthside Books in Juneau, or at the brewery’s online Gear Store at www.alaskanbeer.com.

The Brew Crew also invite cooking and beer enthusiasts to visit the searchable recipe database on the brewery’s web site, www.alaskanbeer.com, for even more than the 101 recipes found in the cookbook.