(JUNEAU, Alaska)  – With a goal of making a refreshing session beer that still packs the full flavor of an IPA, the brewers at Alaskan Brewing Company used five hop varieties to create Kicker Session IPA. All that hop flavor is carried with a light to medium malt body and a low 4.5% alcohol content, making Kicker a trusty companion after adventures that can last a full day – which in Alaska can be 24 hours long. 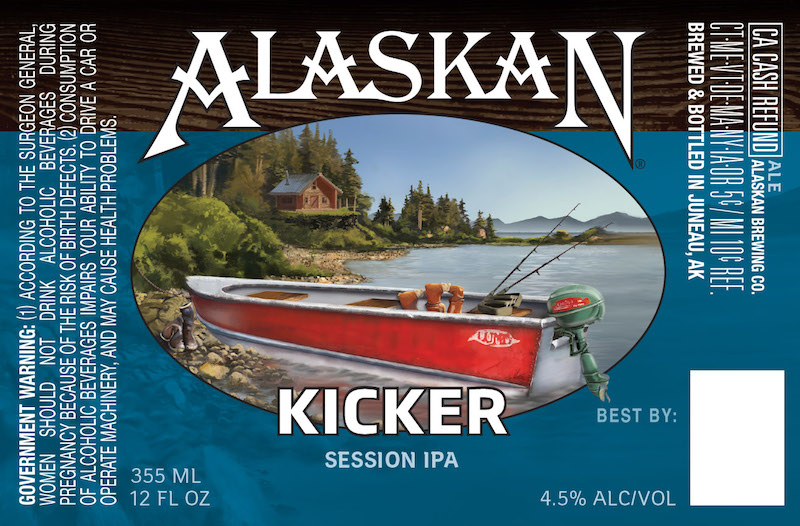 “Our brewers were inspired by the long daylight hours of summer here in Alaska, and the idea of having a beer to take along as a companion after the adventure,” said Brewing Manager Rob Day. “The name Kicker comes from the small engine used on boats in our waters as a trolling motor and also often used as a backup to the main engine. Those little kickers have saved many folks here from having to paddle back to port – they may be small, but they’re reliable and always up for the challenge.”

Customers in the Brewery’s tasting room in Juneau have for years asked for a beer that had the robust flavors they had come to expect from the Alaskan style of brewing, with a lower alcohol content so they could enjoy more of that flavor.

“It’s always been some sort of unwritten rule that if the beer has a lower alcohol content, it somehow has to have less flavor,” said Day. “It isn’t easy to get good body and flavor into a lower-gravity beer, but we achieved a light to medium body by using Munich and Dark Crystal malts to bring a lot of backbone to the malt build without increasing the gravity. Then we just went a little overboard with the hops.”

Dry hopping with five varieties brings a high level of complexity to Kicker – both in aroma and flavor. Amarillo, Centennial, Citra, Simcoe and Mosaic hop flavors and bitterness come through boldly, with fruity flavors of strawberry and tangerine notes coming from the Citra and Amarillo, and a grapefruit and pine taste from the Simcoe and Mosaic.

The red skiff depicted on the label with the small kicker engine is a staple of living the Alaska lifestyle in coastal communities across much of the state. They are the packhorse of living near the water, whether used for hauling gear to a remote cabin, trolling for salmon, or hitting a secret halibut hole. Their aluminum hulls and light kicker engines allow them to be hauled on shore, and their “V” shape cuts through the often daunting Alaska seas.

Kicker is the first new year-round six pack Alaskan has introduced since 2013, and will be available in all 17 states where Alaskan beer is distributed. For more information, check out Alaskan Brewing’s website at www.alaskanbeer.com.