(JUNEAU, AK) – Beer drinkers will soon see a new Alaskan Brewing Company 12-pack on the shelf – and it will give them a whole range of hop-centric flavors from which to choose. The Boundary Range Hop Pack features some of our bestselling hop-forward beers, a double IPA and even a beer that cannot be bought in any other package. 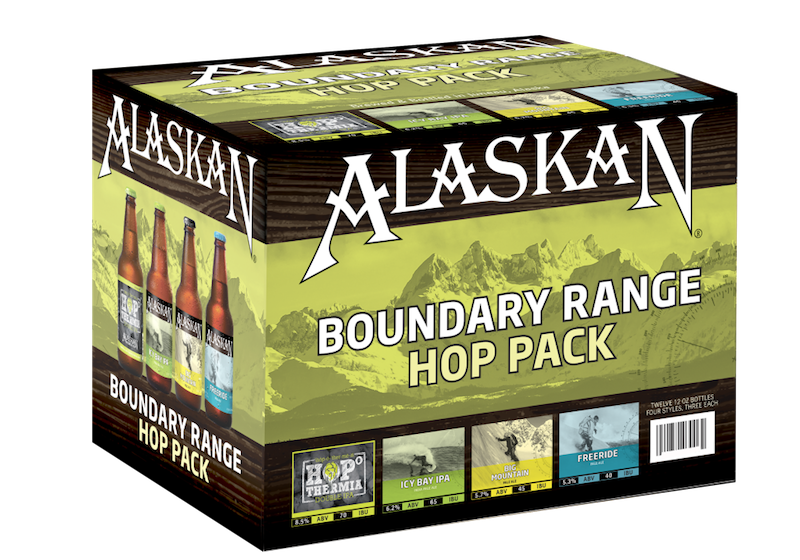 “It’s no secret that there are a ton of hop-heads out there looking to explore a wide range of taste variations, and that’s exactly what this new Hop Pack lets them do,” said David Wilson, head of Quality Assurance at Alaskan. “We decided to not just make this Boundary Range variety pack hop forward, but we upped the ante by including Hopothermia and Big Mountain.”

Hopothermia is Alaskan Brewing’s Double IPA that is typically sold in 4-packs. Introduced as a year-round product in 2014 it quickly garnered attention for its ability to balance intense hop flavors with a deep malt backbone and 8.5% alcohol by volume. Big Mountain Pale Ale was introduced as last year’s spring seasonal beer, and fans of the brewery have been very vocal in demanding that it come back. Big Mountain will only be available in the Boundary Range Hop Pack.

“We are excited to be bringing Big Mountain back for this package, and I think our fans will have a great time comparing all the beers in the Hop Pack,” said Wilson. “It’s fun to experience the wide variety of taste and aroma combinations that can happen in these beers, which are using some of the most sought-after hop varieties, concentrating on Pacific Northwest hops.”

Rounding out the Hop Pack are Icy Bay IPA and Freeride Pale Ale, two of Alaskan Brewing’s most popular beers. Among the many hop varieties included in the beers of the Boundary Range Hop Pack are Cascade, Bravo, Calypso, Citra, Centennial, Amarillo, Simcoe and Mosaic hops.

The Boundary Range of mountains separates Southeast Alaska from British Columbia – peaks of the range form a chain that create the international border between the U.S. and Canada. They are considered a sub range of the Coast Mountains, and some of the highest peaks include Mount Ratz, Devils Thumb and Devils Paw in the Juneau Icefield. These peaks rise from the seafloor above Inside Passage waters, revealing sheer faces of more than 10,000 feet.

The Boundary Range Hop Pack is Alaskan Brewing’s second variety pack joining the very successful Sampler Pack, and it will be available in all 17 states where Alaskan beer is distributed. For more information, check out Alaskan Brewing’s website at www.alaskanbeer.com.