(JUNEAU, Alaska) – Alaskan Brewing Company today announced the start of a facility expansion, the installation of a new beer canning line, and the beginning of distribution into South Dakota and Michigan.

“It’s a huge day for us here at Alaskan,” said co-founder Geoff Larson. “We have so much going on, and it is all focused on bringing our beer to new consumers, in new locations and in new packages – while taking care of all the loyal customers who have gotten us this far.” 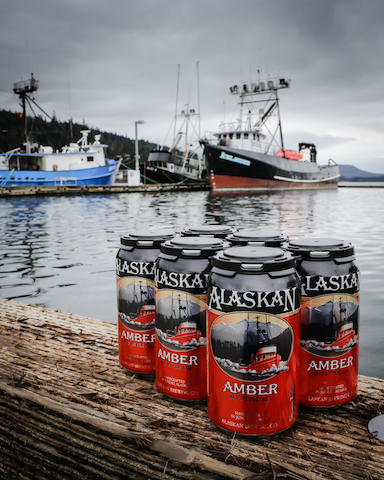 The facility expansion broke ground this week, and will allow for Alaskan to join its two existing buildings together, in order to make more room for packaging and warehousing. Larson said it will also bring greater efficiency to operations, as forklifts will be used to move supplies and product instead of the current system of trucking beer between the two buildings.

The expansion will be conducted in two phases, with the first phase allowing for increased warehouse and production capacity completed by February 2015. The concept for the second phase will eventually allow for new retail space to expand the brewery’s gift shop and tasting room.

The new canning line installed in the past month was chosen with quality in mind, and reduces the amount of oxygen picked up during the canning process to the same level as the bottling line, which will continue to ensure the freshest tasting beer for Alaskan fans. In order to enter the growing beer can market, Alaskan bought a small filler and shoehorned it into a tight spot in the brewery between the existing bottling line and the packaging tanks.

“With our small warehouse and the addition of a new can line, it is so tight in our packaging areas right now that we are only going to be able to produce a limited amount of cans and will only be putting out Alaskan Amber and Freeride APA for our local Alaska market to start with,” said Plant Manager Curtis Holmes. “But we’re excited to be able to supply cans as an alternative package so people can continue to enjoy our beer on their outdoor Alaskan adventures.”

Holmes said that once the first phase building construction is finished, the plan is to move the canning line into the new building.

“With the larger warehouse we can then increase our production and supply cans to the rest of our markets,” Holmes said.

And those markets have expanded as well – with the addition this week of South Dakota and Michigan, making a total of 17 states where Alaskan is now available.

“We have been working on getting into these states for quite a while now, and we couldn’t be happier about our new distributor partners,” said Jon Blakley, Sales Operations Manager for Alaskan. “South Dakota connects our Midwest territory, and Michigan is a major new market for us – it’s the first state we have entered that operates on East Coast time! And Michigan beer drinkers are very knowledgeable, so we think our beer is going to do really well there.”

Gary Thompson of Powers Distributing in Detroit – part of the M1 Network of 11 distributors covering the entire state of Michigan – echoed those comments. “Alaskan is a brand that already has great name recognition, so we know there is a pent-up demand for their beer. This network is really excited to open the ‘Alaskan Pipeline!’  Alaskan is a highly regarded brewer and supplier and we look forward to a long and successful relationship.”

“Everything we do at Alaskan has one focus,” said Larson. “Whether it is expansion of the brewery, installing new packaging lines or choosing our distributor partners – it’s all about bringing the highest quality beer and a taste of Alaska to our fans.”