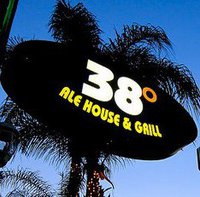 Earlier this week, The Full Pint was tipped off by The Carlsbad Patch that a restaurant called Catch Carlsbad would be rebranding into 38º Carlsbad.  Crazier than those string of words, was the fact that the publication Carlsbad Patch assumed that this was an expansion of Clay Harding’s craft beer bar, 38 Degreees Ale House and Grill in Alhambra, CA.  After Carlsbad Patch was informed there was no affliation between the two restaurants, we reached out to both Clay Harding of 38 Degrees and Mayur Pavagadhi, the gentleman turning his seafood restaurant into a craft beer restaurant called 38º Carlsbad.  Mayur owns other restaurants in the area under the name Paon Carlsbad LLC.

We reached out to Clay Harding of 38 Degrees, who had this to say: “My brand 38 Degrees has symbolized and represented an enormous amount of good will in craft beer culture and our community since 2009.  Confusion of the proposed Carlsbad location and mine is inevitable as folks were already mislead and commenting on “our arrival” into Carlsbad Village on internet sites.  As I continue my expansion process of other 38 Degrees Ale House & Grill’s   I would like any persons in a town I open in to feel comfortable and confident that they will enjoy the same great experience the name 38 Degrees portrays.  I have and will always support those who spread the word, educate, brew and sell real, live craft beers.  I would welcome them as a brother in arms if they opened with an original name and look that defines who they think they are.”

It should be no secret to many of our local fans that we are close with 38 Degrees, as they started around the same time we did years ago, and is the closest quality craft beer bar to our headquarters.  While as of press, Clay does not hold any trademarks to 38 Degrees, he has clearly had the name since early 2009, and has been known in the craft beer industry as a second generation so-cal publican since the 90’s. We asked Clay what he desires and what he plans on doing. “I will be making some phone calls, and seeing what I can do to protect my property.” “The color scheme and font used on their logo is very similar to my logo, even The Patch was confused that this wasn’t an expansion of my restaurant in Alhambra, just to demonstrate the confusion this is already causing.”

While we are happy customers of 38 Degrees Alhambra, we wanted to hear the other side of the story, and reached out to Mayur Pavagadhi for his thoughts on the matter.  We asked him how he came up with the idea to transform his seafood restaurant into 38 Degrees. He responded:  “Craft beer is obviously a very popular market and decided this would be a great venture to get into. I sat down with my partners and did a search for 38 Degrees Carlsbad, and there were no registered marks for it. The term 38 Degrees is the temperature in which we are asked by the beer industry to keep our walk in keg cooler, we felt this was a great name to use.”

In regards to the pictures shown on Carlsbad Patch of the restaurant having a very similar logo including font and font color, he said “I drive by a realtor every morning, they have this bright orange font that really catches my eye. I thought that would be the perfect color for our signage.  We have only started rebranding last week, and the second half of the sign, which will read ‘Carlsbad’ will make it more clear that we aren’t the same. I spoke with the owner of 38 Degrees in Alhambra, and told him that if it was his mark, he should have registered it. I don’t want to go the legal route on this, but I have spent too much money to change the name at this point.  I was contacted by a pretty big craft brewery here in San Diego about this, and my phone has been off the hook. There is a big difference between 38 Degrees Ale House and 38 Degrees Carlsbad.”

At this point in my conversation, I wanted clarity as to what he would do at this point. Mayur said “I have registered the name adn won’t give that up. Nobody wins taking the legal route, so myself and Mr. Clay will have to sit down and talk. If we go the legal route, the lawyers get the money.”

My final question to Mayur was if he had done a Google search prior to registering the name. “I did do a search, and I found 38 Degrees Ale House in Alhambra. We are 38 Degrees Carlsbad. If I was Clay, I would be happy to have the publicity. If this was reversed, I would not make a fuss. I am a very easy going person.”

We will continue to cover this story as it unfolds. After gathering this information, it would seem that Mr. Pavagadhi is using the legal system and a little bit of the game of chicken with Mr. Harding.  As Mayur so astutely put it, the craft industry is all lovey dovey, and that may play to the advantage of Clay and 38 Degrees Ale House and Grill.

Link to article on Carlsbad Patch with pictures.
A trip in the Wayback Machine for Catch Carlsbad, the former restaurant on Carlsbad Drive now known as 38º Carlsbad