(San Leandro, CA) — Last year, 21st Amendment Brewery partnered up with homebrewer extraordinaire, Mike “Tasty” McDole, to collaborate on a delicious, limited-release IPA. The beer came and went far too fast so the brewery decided to bring it back for good. Releasing in six-packs, 15-packs and 19.2oz cans, Tasty IPA returns this September through March 2019 – though it may look a little different than you remember. 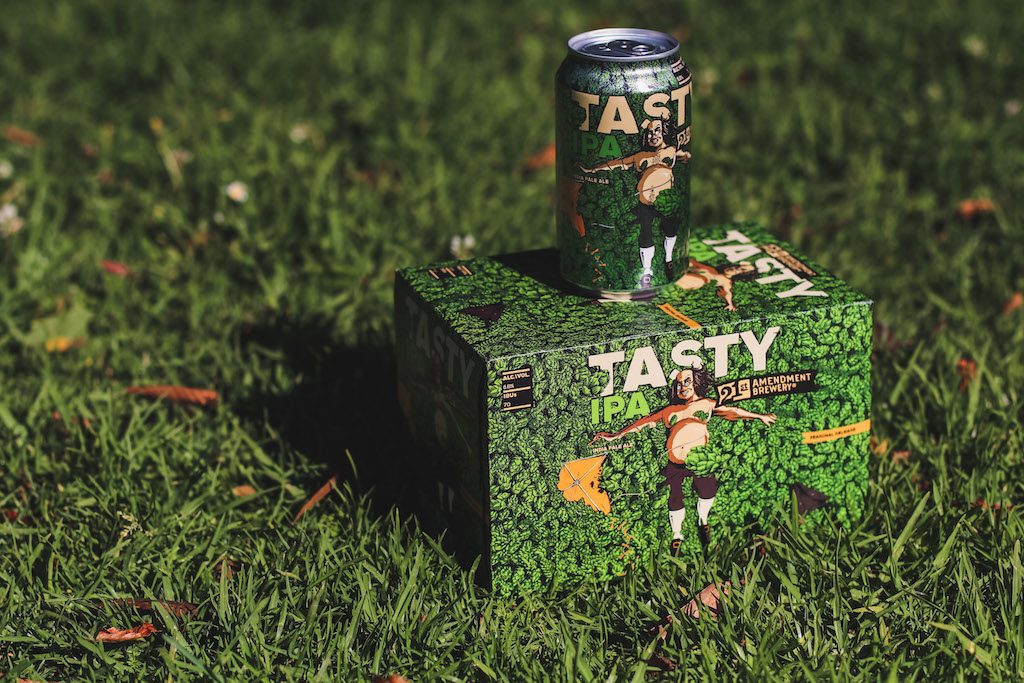 “The original artwork featured McDole laying in a bed of hops, which inspired the direction for Benjamin Franklin, a man who was an advocate for homebrewers,” said Nico Freccia, co-founder of 21st Amendment Brewery. “This new design fits perfectly into our brand portfolio and we are excited for its permanent place as our fall to winter seasonal.”

Derived from test batches of McDole’s own homebrew recipe, this 6.8%, gold-colored IPA is the perfect beer to have on-hand when you have history to make. With bright, fresh flavors and aromas of hops, tropical stone fruits and a hint of spiciness, it will be difficult to have just one.

“If you like hops, and you love IPA, this is the beer for you,” said Shaun O’Sullivan, co-founder and Brewmaster of 21st Amendment. “We used Calypso, Ekuanot and Azacca for flavoring; CTZ for bittering and Simcoe, Calypso and Ekuanot in the dry hop.” Ben Franklin once said, ‘well done is better than well said’ and this beer is sure to prove that theory.

Coming into the seasonal slot as Hell or High Watermelon winds down with summer, Tasty IPA will be available in all 21A distribution markets including AK, AZ, CA, CT, DE, FL, GA, ID, IL, KY, MA, MD, ME, MN, NC, NH, NJ, NV, NY, OH, OR, PA, RI, SC, VA, VT, WA and Washington D.C. Find the beer in a location near you at http://21st-amendment.com/find-some.

About 21st Amendment
In 2000, Nico Freccia and Shaun O’Sullivan opened the doors to the 21st Amendment brewpub in San Francisco’s historic South Park neighborhood with Freccia managing the restaurant and O’Sullivan spearheading the brewing process. In addition to quickly becoming one of the city’s favorite pubs, 21st Amendment began expanding beyond the Bay Area by helping to pioneer the movement to canned craft beer. In 2015, they opened a Brewery & Tap Room in San Leandro where most of their beers are made and canned. Known for artistic packaging, witty names and delicious brews, 21st Amendment offers year-round selections, seasonal offerings and its Insurrection Series of small-batch, limited releases. Sold in 27 states, 21st Amendment is among the top 50 craft beer breweries in America.