(SAN LEANDRO, CA) – Throughout history, as well in our own lives, we all encounter a host of seemingly terrible ideas that lead to a road unknown. For example, leaving a well-paying desk job to become a brewer, or being one of the first breweries to put craft beer in a can, or brewing a beer with watermelons! Ok that last one was actually a great idea… 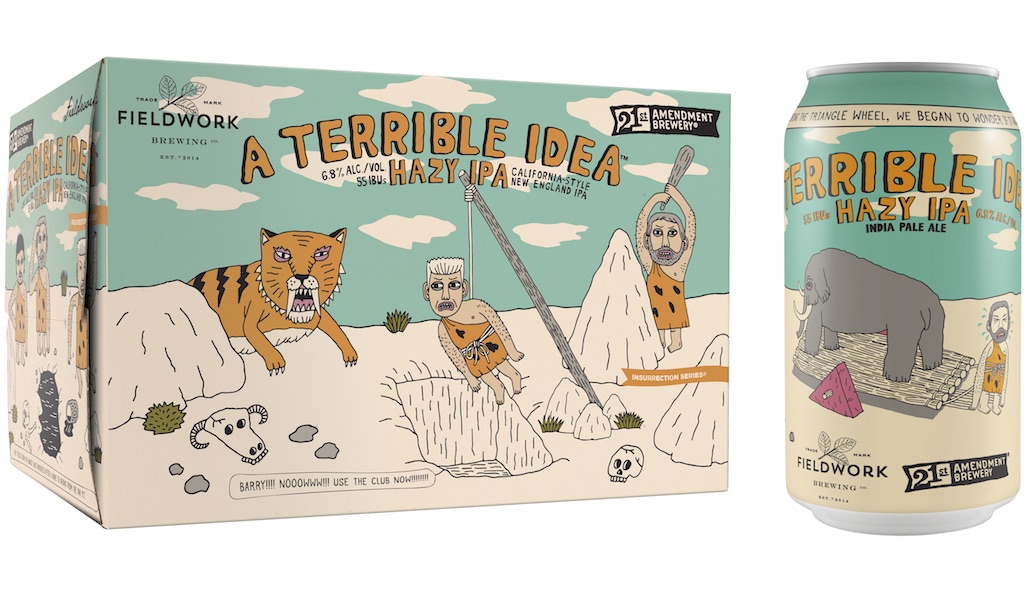 With every bad decision there is a risk and sometimes an incredible reward, which brings us to our newest beer… A Terrible Idea Hazy IPA. The beer was brewed in collaboration with our local friends, Alex Tweet and Barry Brandon, of Fieldwork Brewing Co. (who might know a little bit about hoppy and hazy beers).

Crack open a can and you’re instantly hit with a floral, dank and piney hop aroma. At first sip, you’re lulled into delicate malt clouds, with hops layering in a juicy mouthfeel and notes of peach, orange, mango and pineapple. The beer finishes clean at 6.8% ABV and 55 IBUs.

“We used four pounds of hops per barrel in the dry hop alone, which is twice our typical rate for most of our 21A beers,” said Shaun O’Sullivan, Co-Founder and Brewmaster of 21st Amendment. “At one point I remember asking Barry and Alex if adding this many hops was a terrible idea and they just shrugged their shoulders and added more.”

“The Citra, Mosaic, Ekuanot and Calypso hops in this beer were all I heard about for days and days. They couldn’t get enough,” said Nico Freccia, Co-Founder of 21st Amendment. “But we also used a Vermont ale yeast, so that makes A Terrible Idea a ‘California New England Style Hazy IPA’ (new category?) that is in a league of its own.”

While we understand that the #HazeCraze will peak your interest, we know the packaging for this beer will surely keep your attention. All four panels of the six-pack carrier tell a hilarious tale of five knuckle draggers who weren’t afraid to ignore popular opinion, follow their hearts and make an extraordinary beer. And in all honestly, we’re glad they did. In a succession of terrible ideas that haunt us all, was making this beer one of them? We stand behind the claim: absolutely not!

A Terrible Idea is making its grand debut at 21st Amendment’s AugustFest anniversary party on Saturday, August 18th. Following the release, the Brewmasters from both breweries will take this terrible show on the road with A Terrible Idea Tour of launch events in the following locations:

Wednesday, August 22nd @ Golden Squirrel in Oakland, CA
Thursday, August 23rd @ Toronado in San Francisco, CA
Sunday, August 26th @ Small Bar in San Diego, CA
Wednesday August 29 @ Monks Pub AND Kaiser Tiger in Chicago, IL
Monday, September 3rd @ Hop Grenade in Concord, CA
For the rest of the beer-loving country, a limited amount of A Terrible Idea will be available in six-packs and on draft in all 21A distribution markets including AK, AZ, CA, CT, DE, FL, GA, ID, IL, KY, MA, MD, ME, MN, NC, NH, NJ, NV, NY, OH, OR, PA, RI, SC, VA, VT, WA and Washington D.C. Find the beer in a location near you at http://21st-amendment.com/find-some, and be sure to follow us on social media for updates on the ATI Tour @21stAmendment!

About 21st Amendment
In 2000, Nico Freccia and Shaun O’Sullivan opened the doors to the 21st Amendment brewpub in San Francisco’s historic South Park neighborhood with Freccia managing the restaurant and O’Sullivan spearheading the brewing process. In addition to quickly becoming one of the city’s favorite pubs, 21st Amendment began expanding beyond the Bay Area by helping to pioneer the movement to canned craft beer. In 2015, they opened a Brewery & Tap Room in San Leandro where most of their beers are made and canned. Known for artistic packaging, witty names and delicious brews, 21st Amendment offers year-round selections, seasonal offerings and its Insurrection Series of small-batch, limited releases. Sold in 27 states, 21st Amendment is among the top 50 craft beer breweries in America.