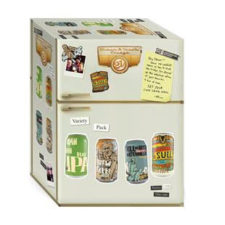 (San Leandro, CA) – Summer is a time for refreshing brews and warm weather favorites, such as Hell or High Watermelon Wheat, an American Wheat Beer and El Sully, a Mexican lager. However, the team at the 21st Amendment Brewery doesn’t believe in stopping there when it comes to summertime sipping. A fun and hoppy new IPA is the 21st Amendment difference and co-founders Nico Freccia and Shaun O’Sullivan differentiated their second seasonal variety pack with the addition of Blah Blah Blah IPA, a brand new double IPA.

“We love our hops like everyone else, but we also like to have fun with our beers. There are over 4,200 breweries in America and it seems like all of them are making an IPA if not several,” says Freccia. “There are West Coast IPAs, Session IPAs, Black IPAs, Grapefruit IPAs, Blah Blah Blah IPAs (you get the idea). This style is clearly here to stay and our Blah Blah Blah IPA is a limited edition release that in many ways pays tribute to the prevalence and popularity of this style.”

“Blah Blah Blah IPA at 8% ABV is a deep gold color and a tongue-in-cheek commentary on the popularity of the IPA style and all its sub-styles that have become part of craft beer conversations and offerings,” says O’Sullivan. “We incorporated malts that we haven’t played with before, and in addition to that we late hopped the kettle giving the beer explosive hop flavor and aroma. It’s jam packed with Mosaic, Citra and the latest Idaho 7 hop, and at 2 pounds per barrel of dry-hops (that’s a lot folks) the aroma is amazing.”

The 12-pack variety pack ‘fridge’ ensures there is a brew for everyone – the light-bodied drinker to the heavy-bodied drinker. In addition to Blah Blah Blah, it’s filled with 21st Amendment’s summer in a can Hell or High Watermelon Wheat, a crisp, dry American wheat beer brewed with real watermelon, and El Sully – a Mexican lager brewed with Pilsner and Vienna malts and flaked maize. Brew Free! or Die IPA rounds out the fridge pack with a solid malt backbone and firm bitterness that doesn’t disappoint for those looking for a stronger summer style.

Hitting shelves in California on June 1, 2016, Freccia and O’Sullivan’s Fridge Variety Pack is a perfect addition to summer cookouts or poolside indulging. For up-to-date availability, events and promotions, visit www.21st-Amendment.com.

ABOUT 21st AMENDMENT:
In 2000, Nico Freccia and Shaun O’Sullivan opened the doors to the 21st Amendment brewpub in San Francisco’s historic South Park neighborhood with Freccia managing the restaurant and O’Sullivan spearheading the brewing process. In addition to quickly becoming one of the city’s favorite pubs, 21st Amendment began expanding beyond the Bay Area by helping to pioneer the movement to canned craft beer. Known for their witty names and delicious brews, 21st Amendment offers year round selections, as well as seasonal offerings and their infamous ‘Insurrection Series’, a once-in-a-while limited edition release. Sold in 24 states, 21st Amendment operates out of its new San Leandro brewery headquarters and is among the top 50 craft beer brewers in America.