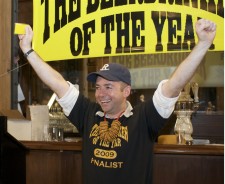 Beer fiends looking to vie for the nation’s ultimate beer crown have until December 31, 2009 to send in their resumes for consideration for the 2010 title.

The current Beerdrinker of the Year, Cody Christman of Golden, Colorado, is living a beer lover’s dream thanks to the contest’s main prize: he enjoys free beer for life at Wynkoop Brewing Company, which happens to be his favorite brewpub.

He is the first Colorado resident to win the crown, and the first winner to be able to make the most of the free beer part of the lofty crown.

Wynkoop management has mounted a large framed photo of Cody, taken right as he was announced the winner, over the table where he has sat for 19 years each Friday after work. His beers there now are free.

(Denver, Co) – Wynkoop Brewing Company is seeking beer resumes from the nation’s most beer-minded men and women for the 2010 Beerdrinker of the Year contest. The 14th annual contest seeks and honors the most passionate, knowledgeable beer lovers and beer ambassadors in the United States.

“Winning the title,” says Cody Christman, the 2009 Beerdrinker of the Year, “has opened the doors to a new beer community across the country and the world.”

Christman is the first Colorado resident to win the Beerdrinker of the Year crown. He’s also a longtime Wynkoop regular who has been drinking beer at Wynkoop after work each Friday for 19 years.

He will never pay for beer again at his favorite brewpub. “I sit there and drink some of the best beer in the world,” he says, “for free.”

Christman estimates the title has saved him a hefty amount of beer money this year, and will save him much more over the course of his life. “But I’m not drinking any more than before,” he notes with a laugh.

He’s enjoying other payoffs from winning the crown last year. “People are always very inquisitive when they hear of my accomplishment,” he says, “so it gives me a great opportunity to talk about craft beer and the contest.”

“I’ve had people come up to me with copies of magazines that covered the event,” he adds. “They ask me to sign the page with my picture on it. I feel like a beer rock star!”

Resumes for the 2010 Beerdrinker search must include each entrant’s beer philosophy, and details on their passion for beer and 2009 beer experiences. Resumes should detail the entrant’s understanding of beer and its history and importance to civilization, and the entrant’s efforts to educate others to the joys of great beer.

Resumes must be sent by email only to [email protected], and received by Wynkoop by no later than December 31, 2009. Each entrant will receive an email confirmation that their resume was received.

At the finals, a panel of wigged & robed judges (comprised of the nation’s best beer minds and previous Beerdrinker winners) grills the finalists and picks the 2009 winner. The event is open to the public and starts at 2 PM.

Wanna be a brewer? Oregon dream job up for grabs Sixpoint Craft Ales Update for End of Summer