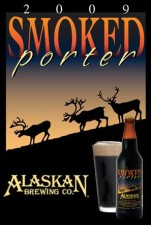 November 1 marks the official release of this year’s vintage of Alaskan Smoked Porter, so be on the lookout for this award-winning and unforgettable beer. Brewed with alder-smoked malt in our on-site smokehouse, Alaskan Smoked Porter is produced in limited “vintages” each year and unlike most beers, may be aged in the bottle much like fine wine.

*The official release date of 2009 Alaskan Smoked Porter is 11/01, but it may be mysteriously appearing in select locations along the West Coast in time for Halloween!

Alaskan Brewing Company co-founders Geoff and Marcy Larson had their eyes on brewing a beer with roasted malts. Marcy’s research even found evidence of roasted malt use in Juneau during the town’s gold rush era.

Geoff and Marcy speculated that roasted malts at the turn of the century in Alaska must have been kilned over a fire and would pick up traces of the smoke.

Crews from Alaskan Brewing and Taku Smokeries, a local smoked salmon fish processing facility, traditionally gathered on Friday afternoons to quaff an Alaskan Amber and munch on smoked salmon. Geoff posed a question to Sandro Lane, owner of Taku Smokeries, about using Taku’s smokehouse to smoke malt. With the promise of a case of the finished product, the deal was struck. Larson and his crew built special racks to hold the malt for smoking.

From there, the malt was smoked over indigenous alder wood – the critical ingredient of the now legendary Alaskan Smoked Porter.

“The first batch was too smoky. It overpowered the beer. However, the porter side came out great. We cooled the smoking process for the second batch giving the beer a subtler smoke aroma,” Geoff said. The brew crew decided to combine the qualities of both initial batches to create a recipe that yielded a complex, yet smoky beer.

The official release date was set for December 24th, 1988. The Larson’s figured the beer would still be available in the New Year so they put 1989 on the label. However, Alaskan Smoked Porter was such a hit that the shelves were empty by New Year’s Eve.

Alaskan Smoked Porter has been brewed every fall since then and has remained just as elusive. It has gone on to become one of the most award winning beers in the history of the Great American Beer Festival with a total of eleven medals, including five straight gold (Smoked Beer Category – 1991 – 1995).It has also won awards at the World Beer Cup and the internationally acclaimed Brewing Industry International Awards in England.

While the Larsons are clearly pleased with the beer’s popularity, they really appreciate the fact that they have resurrected part of Juneau’s history – bringing an element of a style of beer that was produced one hundred years ago to today’s consumer.

And to think that smoked salmon was the catalyst.

Style: Smoked Beer. Known as “rauchbier” in Germany, smoke-flavored beers were virtually unknown in the U.S. until Alaskan Smoked Porter was developed in 1988.

Flavor Profile: The dark, robust body and pronounced smoky flavor of this limited edition beer make it an adventuresome taste experience. Alaskan Smoked Porter is produced in limited “vintages” each year and unlike most beers, may be aged in the bottle much like fine wine.

Ingredients: Water, five types of malt, 2 varieties of hops and yeast with no adjuncts, no preservatives and no pasteurization. Our glacier-fed water originates in the 1,500 square-mile Juneau Ice Field. Prior to brewing, selected malts are smoked in small batches under carefully controlled conditions in a commercial food smoker using local alder wood.

Recommendations: Alaskan Smoked Porter may be enjoyed with smoked seafood, cheese and other robust foods and as an after-dinner drink. It pairs beautifully with everything from bleu cheese to vanilla ice cream and raspberries. This unique beer is also a wonderful flavoring ingredient in sauces, seafood dishes and even cheesecake.