(Escondido, CA) – Suede evokes a sense of smooth, sexy, coolness and , for some, perhaps the ’70’s. But when used to describe the latest concoction from Stone Brewing Co., 10 Barrel/Bluejacket/Stone Suede Imperial Porter, it’s just groovy. The beer was created in collaboration with Tonya Cornett of 10 Barrel Brewing Co. in Bend, OR and Megan O’ Leary Parisi of Bluejacket in Washington, DC. Starting October 6th, the imperial porter will be available in bottles and on draft at select retailers, restaurants and bars across the U.S. 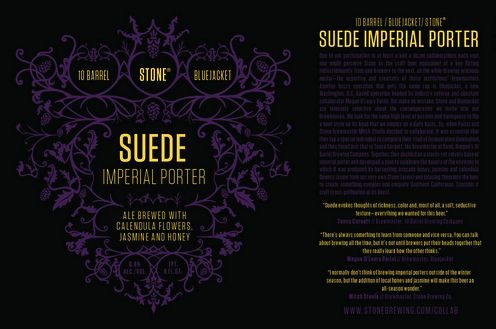 The trio of brewers met each other in typical fashion (at beer events, obviously) and began conversations that eventually led to invites from Stone Brewmaster Mitch Steele to Cornett and O’Leary Parisi, asking them to come out and brew on Stone’s 120-barrel brewhouse. From there, recipe formulation began. Cornett had a vision for the style of beer the trio would produce, while O’Leary Parisi envisioned using ingredients indigenous to Southern California. The latter was accomplished by including avocado honey, dried jasmine, and calendula flowers plucked from the fertile grounds at Stone’s North County San Diego farmstead, Stone Farms.

The result is a luscious, smooth and flavorful beer that incorporates the deep cocoa and coffee characteristics of a porter with a delicate but discernible bouquet of herbs and floral sweetness. “I have always enjoyed the subtleties of ingredients – botanicals, spices, sugars and other things like that, which can enhance the flavors of a base beer,” said O’Leary Parisi. “There is a certain joy to finding that balance of making your additional ingredients perfectly complementary and not overwhelming.”

At 9.6 percent alcohol by volume (ABV), the beer is ready to enjoy now, or may be properly cellared for several months or years. Over time, the jasmine and calendula flowers will take a back seat to rich java and chocolate aromas and flavors. Whether enjoyed now or in the future, this beer is a brilliant example of the spectacular things that can happen when masterful brewing minds converge.