(Baton Rouge, LA) – Tin Roof Brewing Company received a gold medal at the 2018 Great American Beer Festival (GABF) competition. Presented by the Brewers Association, GABF is the largest commercial beer competition in the world and recognizes the most outstanding beers produced in the United States. The top three winners in the competition’s 102 beer-style categories were announced September 22 at the Great American Beer Festival awards ceremony held at the Colorado Convention Center in Denver, Colorado. 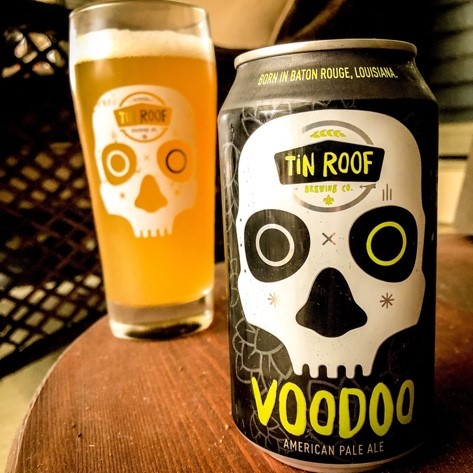 Tin Roof Brewing Company was recognized in the Juicy/Hazy Pale Ale beer-style category for its Voodoo Pale Ale, an American Pale Ale that is loaded with oats and flaked barley. It is heavily hopped with Citra and Simcoe to give it a very citrus-forward aroma. Tin Roof is a 6,000-barrel microbrewery located in Baton Rouge, Louisiana that produces a wide range of craft beers, from the (now) award winning Voodoo Pale Ale to Blackberry tart ales and everything in between.

”To be recognized for our efforts is a tremendous and truly awesome experience. We are surrounded by breweries from within our state and throughout country that are producing world class beers. To be included as one of the best of the best is a huge honor for us. This particular award is especially rewarding for us at Tin Roof because, not only is this the first Gold medal for this inaugural category, but this is also the first GABF Gold medal for any brewery in Louisiana. This is a major accomplishment for our team at the brewery and I am very proud of the work that the crew puts in every single day.” Said Jacob Talley, CEO at Tin Roof.

The 2018 GABF competition winners were selected by an international panel of 293 expert judges from 8,496 entries, received from 2,404 U.S. breweries, plus 101 Pro-Am and 49 Collaboration entries. “The 32 nd edition of the GABF competition yielded a remarkable turnout of the country’s most exemplary beers,” said Chris Swersey, competition manager, Great American Beer Festival. “I’m continuously impressed by contenders’ talent and passion and would like to extend congratulations to this year’s winners for their excellence in brewing.”