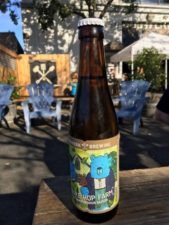 “We had a strong feeling the Funke was going to be something big. It’s an innovative style that represents the new direction of Sudwerk,” Sudwerk Brewing co-owner Trent Yackzan said. “It’s a huge win, not just for the brewery, but for Davis and the greater Sacramento region. Our team works incredibly hard, and it’s amazing to be recognized among the top tier breweries in America.”

Fünke Hop Farm is a sour saison aged for six months in Petite Syrah and Grenache wine barrels. It’s dry-hopped after aging, creating a unique blend of sour, citrus and stone fruit flavors. Co-owner Ryan Fry calls it a “gateway sour,” for its subtle, well-balanced flavors. “Our goal with this beer is to introduce people to something they’ve never tried before, and to create a style that helps define the Sacramento region as a global beer destination.” It is 6.5 percent alcohol by volume and 15 International Bittering Units.

Now it’s a matter of keeping up with demand. “We can’t make enough of it,” Yackzan said. Originally part of its Brewers’ Cut membership series, Fünke Hop Farm sold in 750 ml bottles at Sudwerk’s taproom, The Dock, and select retailers. The next limited-release batch will be available by the end of the year.

In June, Fünke Hop Farm won gold for Brett and Other Sour Beer at the San Diego International Beer Competition, and gold for Mixed-Fermentation Beer at the California State Fair Commercial Beer Competition. The San Diego contest is the largest in the state and one of the most competitive in the U.S., with 1,374 entries this year. The state fair is the second-largest commercial beer contest in California.

Sudwerk Brewing beers earned several medals this summer: Rye of the Lager won the gold for Rye Beer in the San Diego contest; Northern Pilsner won silver among Pilsners at the state fair, as did Hefeweizen Bavarian Wheat for the German Wheat and Rye Beer category; and Märzen Amber Lager won a bronze for Amber Lager at the San Diego competition.

Established in 1989, Sudwerk Brewing Co. specializes in artisan brews, specifically West Coast craft lagers. Its taproom, The Dock, at 2001 Second St., Davis, is open from 4 to 8 p.m. Tuesdays through Thursdays, 4 to 9 p.m. Fridays and Saturdays, and 2 to 8 p.m. on Sundays. It offers a rotating menu of experimental and innovative beers, “honest pints” and growler fills, fresh White Labs brewers’ yeast, and good conversation.