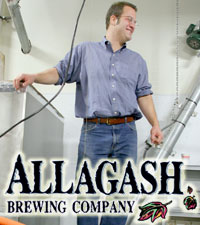 We recently sat down to speak with Rob Tod of Allagash Brewing. Rob is arguably one of the most influential brewers of American made Belgian style beers and has been successful at introducing his twist on the style to new and old craft beer fans alike .

He talks with us about Allagash’s tenure in the craft beer industry, price points, limited edition beers, the Portland Maine beer scene and more. We hope you enjoy this interview. Cheers, TFP

TheFullPint: You are now in your 17th year with Allagash. How does it feel to be in the business this long?

Rob Tod: Definitely does not feel like 17 years. I guess it has gone quickly because I love it! But, there has been a LOT of change over those years. The first 10 years were an uphill battle to say the least… people were not drinking Belgian Style beers. I used to walk into accounts with a sample of White, and the standard first response was “what’s wrong with it??” (why is it cloudy, why does it taste weird, etc). Luckily, that has changed…

TFP: When Allagash started, there weren’t nearly as many Belgian-style ales on the market. Now, it seems every brewery has at least one Belgian-style in their portfolio. How do you think they are doing for the most part creatively and stylistically speaking?

RT: Yes, when we started there were relatively few breweries brewing Belgian Style beers. There are still not many breweries that exclusively brew Belgian style beers. But we think it’s great that other brewers are exploring the Belgian beer tradition… it helps push awareness for the category. I think there are a lot of great Belgian style ales being brewed now in the US!

TFP: I view Allagash as the God-father of the $20.00 + bottle of beer. What are your thoughts on the rare beer/premium/artisan beer market currently? Do you think the trend will ascend or descend? Is there a cap?

RT: Good question… when we first made the Curieux, and looked at our cost, and it was going to be a $13.00 bottle on the shelf. We thought we’d maybe sell a few hundred bottles a year tops, because there were few (if any in some stores) bottles of beer that were over $10.00/bottle. But, when people tried it, most saw the value, and now we can hardly keep up with production.

The Interlude came a few years later, and is now usually over $20.00/bottle. We never set out to make a +$20 bottle of beer, but when we tasted the test batches (which took 4 months to ferment), we thought adding a year of aging in French oak wine barrels would bring a lot to the beer. So that obviously added a great deal of cost. In a nutshell: The Interlude costs a LOT to make… 4 months of fermentation in Stainless with a yeast strain that costs us a lot to culture, then half of the beer aged in French oak for a year (while the other half ties up a stainless tank for a year), then bottle conditioned for over a month in a bottle that is imported and cork finished, etc… We think for ~$23 that it is a great value.

TFP: Can you give us the story behind the fairly recent limited release 375 ml series/ low key bottle release program, and where will it go from here? editors note: I’m sure there is a real name to the project or series.

RT: Actually no name for these beers as a group. They are just individually named. The story is basically that it is a great format for us to be able to use to experiment with small batches of beer. We love experimenting and learning. We now have over 100 barrels filled with “experimental” beers in various stages (in addition to the barrels we have for Curieux, Interlude, Odyssey, etc). When we go into the barrel room for a tasting and find something we love, we’ll usually put it in the 375 format and sell it in the brewery store. In general, these batches are too small for the 750ml format and extended distribution.

TFP: Many U.S. cities have jumped on the Beer Week bandwagon in the last 3 years. Portland, ME is a great beer city, yet hasn’t started a Beer Week of their own. Can you tell us if we can expect one eventually, or if one is already in the works?

RT: I think everyone up here has been too busy brewing beer to set one up! Good idea though.. maybe someone will take the reigns and put one together.

TFP: Why do you feel Portland, ME is such a great beer city?

TFP: Did you anticipate craft beer taking off as big as it has in the last few years?

RT: Once people try a well made craft beer, it’s awful hard to go back to a mass-produced commodity beer where all the character has been stripped out. I think the category will absolutely keep growing and thriving.

TFP: Can you please share with us the process Allagash goes through when determining what market you’d like to enter next, or what market to pull out of to meet demand?

RT: As far as entering markets, we have not done that in years. In the old days, we were just trying to survive, and would honestly sell to anyone who would buy it. Many wholesalers would not even call me back when we were interested in opening up new markets, but we opened as many as we could back then just to sell enough beer to pay the bills. Luckily though, we’ve ended up with a GREAT network of wholesalers.

Pulling out of markets has been tough. The last couple of years we have simply not had enough beer to go around. We tried to do our best to stay in our biggest & most developed markets (sometimes it can be very difficult to sustain a market that is a great physical distance from the brewery that is not doing very much volume…). We just had to pull out of 2 more states that I love: WA & TX. I told both distributors we’d be back as soon as we could, and we’d make sure they were the ones who were selling our beer when we returned.

TFP: Name/Word association: I will name a brewery , and you give a minimal of a one word comment, or optionally, longer.

Shipyard Brewing
RT: They’ve helped us out many times with spare parts, ingredients, etc, and we always try to do the same for them

Dogfish Head Brewing
RT: Sam is a great friend & an innovator in the craft beer community

Cigar City Brewing
RT: Not familiar enough with them… Now I’ll make an effort to give their beer a try!!

Portsmouth Brewing
RT: I’ve never met a beer brewed by Tod Mott that I did not LOVE. People who live near that pub are lucky!

TFP: What is your favorite non- Allagash beer, and why?

RT: I really don’t have one favorite… too many great beers out there to list!