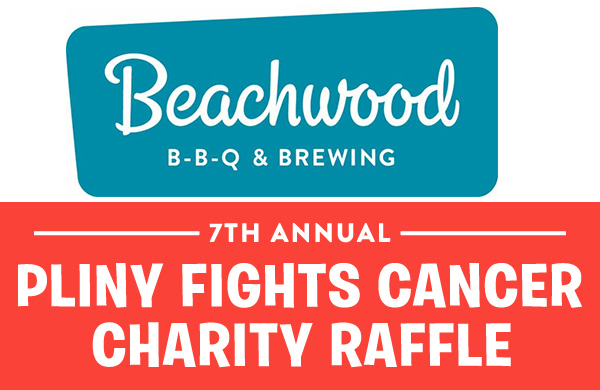 Beachwood BBQ & Brewing is raffling off ALL of their pints of Pliny the Younger with 100% of the proceeds going to the Melanoma Research Foundation to honor the memory of dear friend, Tony Carbone.

In lieu of customers battling long lines for the mere chance of scoring a pint of this hoppy, boozy delight, we’re once again turning the “I want my Pliny” frenzy into the now 7th Annual Pliny Fights Cancer Charity Raffle.

Tickets will be available for purchase at:
Beachwood BBQ in Seal Beach and Beachwood BBQ & Brewing in Downtown Long Beach

The cost is $5 per ticket
No limit to how many you can buy | CASH ONLY!

The drawing
On February 12th, raffle tickets will be drawn at random for ALL of our pints of Pliny. The drawing will be streamed live on the Four Brewers webcast, winners will also be notified via email or phone.

Redemption Period
Redemption period is between February 20th and March 1st, 2018. Winners will be alerted of which Beachwood location to redeem their pints of Pliny the Younger.