Stone Give Me Stout or Give Me Death, A Collaboration Celebrating Virginia Craft Beer

(RICHMOND, VA) – The fiery quest for independence from the people of the Commonwealth of Virginia rings long after Patrick Henry once stood addressing the city of Richmond in 1775. Three local brewers, Stone Brewing, Ardent Craft Ales and Hardywood Park Craft Brewery have bound together alongside His Excellency, Virginia Governor Terry McAuliffe delivering a daring proclamation: Give Me Stout or Give Me Death. Stirred to join the cry for resistance against the tyrannical oppression of industrial beer, the teams brewed this bold assertion with locally grown raspberries and blackberries to rally craft beer fans beginning this week. 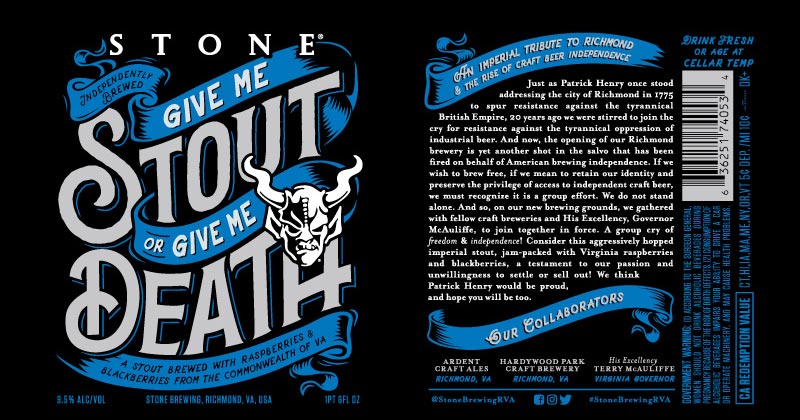 “If we wish to brew free, if we mean to retain our identity and preserve the privilege of access to independent craft beer, we must recognize it is a group effort,” proclaimed Greg Koch, Stone Brewing executive chairman & co-founder in a joyful cry of freedom and independence. “Consider this aggressively hopped imperial stout a testament to our passion and unwillingness to settle or sell out! I know not what course others may take; but for me, give me independently brewed stout, or give me death!”

Newcomers to the region, Stone Brewing hosted the collaboration, welcoming two of the city’s most esteemed breweries and brewing with inspiration from Virginia’s craft beer-loving Governor, Terry McAuliffe. Stone is known for its assertive, hop-forward beers and Give Me Stout or Give Me Death lives up to the brewery’s storied reputation. Pouring deep, dark brown, the 9.5% ABV stout is complex and full-bodied with a nice complement of fruit, malt and hops. The blackberries and raspberries provide a sweetness to start, followed by fruit tartness that nicely balances the chocolate and nutty characters of the malts. Belma hops have a berry and citrus character when used late in the brewing process, which complement the Virginia-grown berries, making for an assertive bitterness on the finish alongside the warm flavors of roasted malt.

“With nearly 160 craft breweries, Virginia’s craft beer industry is booming and thanks to partnerships like this, we can continue to share the Virginia craft beer story not only up and down the East Coast, but across the U.S.,” said Virginia Governor Terry McAuliffe. “Stone Brewing has built an incredible operation here that is already benefiting the City of Richmond’s economy and its quality of life. Now with its first collaboration with local mainstays, Ardent Craft Ales and Hardywood Park Craft Brewery, Stone has created an excellent platform for future partnerships with the Virginia craft beer industry. It was a great honor to contribute to the production of this stout that touts both the history of our Commonwealth and its rich agricultural offerings, and an even greater honor to drink it!”

Give Me Stout or Give Me Death is the debut special release of Stone Brewing – Richmond and the first collaboration hosted at the new brewery, which began production last summer. Distribution will be limited, with a second collaboration from the same fierce team Give Me IPA or Give Me Death releasing nationally in February.

Just as Patrick Henry’s cry for resistance was preserved for years to come, Give Me Stout or Give Me Death may be enjoyed immediately or cellared in remembrance of history in the making.

About Stone Brewing
Founded by Greg Koch and Steve Wagner in 1996, San Diego-based Stone Brewing is the 10th largest craft brewer in the United States. Stone has been listed on the Inc. 500 | 5000 Fastest Growing Private Companies list 12 times, and has been called the “All-time Top Brewery on Planet Earth” by BeerAdvocate magazine twice. The multifaceted company is the first American craft brewer to independently build, own and operate their own brewery in Europe (Berlin, Germany), and also opened a production brewery in Richmond, Virginia in 2016. Known for its bold, flavorful and largely hop-centric beers, Stone has earned a reputation for brewing outstanding, unique beers while maintaining an unwavering commitment to sustainability, business ethics, philanthropy and the art of brewing. For more information on Stone Brewing, please visit stonebrewing.com or the company’s social media sites: Facebook, Instagram, Pinterest, Twitter and The Stone Blog.