(ST. LOUIS, MO) — Schlafly Beer announces today the roll-out of 12-packs of Hoppy Wheat in 16-ounce cans. The can release of the popular, warmer-weather seasonal furthers the Saint Louis Brewery’s™ footprint in larger format cans. Schlafly Beer was the first brewery in St. Louis brewery to offer 12-packs of 16-ounce cans with White Lager in December 2017. Hoppy Wheat also continues Schlafly’s value proposition for the can packs–the suggested retail price is equivalent to 12-ounce, 12-pack offerings. The Hoppy Wheat packs will be available across Schlafly’s distribution starting next week. 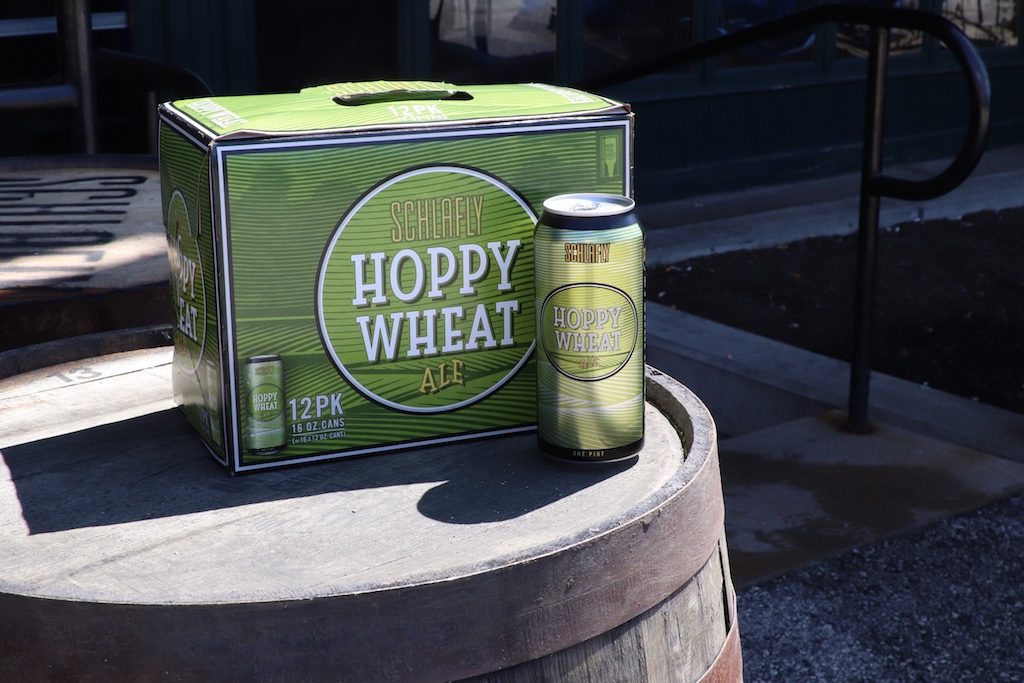 Founding Brewer Stephen Hale explains, “Hoppy Wheat is a refreshing ale with a crisp, clean finish and hoppy bite so it’s perfect for summer. With these 12-packs of 16-ounce cans, consumers are essentially getting four free beers so it’s a perfect pick for summer float trips, picnics, and all other outdoor activities.”

Hoppy Wheat is an unfiltered wheat beer (5.0%) that uses two distinctly aromatic American hops from Washington’s Yakima River Valley: Challenger for its fruity, floral profile and Mosaic for its earthy notes of pine and citrus. The blend of wheat and barley lends a touch of toffee sweetness. As craft brewers continue to look beyond single-serve and four-pack offerings for 16-ounce cans, few have increased the volume to 12-packs. Yet, Schlafly Beer has seen success with the 16-ounce cans in this larger format in grocery chains and larger liquor stores. All canning and packaging for both White Lager and Hoppy Wheat cans takes place at Schlafly Beer’s Bottleworks facility.

The Hoppy Wheat 12-packs will be available for purchase at the Schlafly brewpubs or across the brewery’s distribution region ($14.99 suggested retail) beginning on Monday, April 16. For more on Schlafly Beer’s distribution, visit http://www.schlafly.com/beer-finder/.

Schlafly Beer, St. Louis’ largest locally-owned, independent craft brewery, proudly offers over 60 unique styles of beer. Each is handmade at the Tap Room in Midtown St. Louis or Schlafly Bottleworks in Maplewood. Utilizing 120 hop varietals, 95 malts and grains, 30 different spices and fruits and 18 strains from around the globe, Schlafly also works with local suppliers for everything from farm-fresh food to packaging and labeling. As part of its commitment to sustainability, Schlafly donates spent grain to local farmers to feed their livestock and utilizes 100% renewable energy throughout its operations. The largest Missouri-owned-and-operated beer maker offers free tours of the Tap Room (2100 Locust Street) every Sunday from 12:30 p.m. to 4:30 p.m. on the hour and Schlafly Bottleworks (7260 Southwest Avenue) from noon to 5 p.m. every half hour on Fridays, Saturdays and Sundays. The brand continues to define craft across 12 states and throughout countless fine establishments, backyards and basement bars. Join us at either of our locations and on Facebook, Instagram, and Twitter. For a full listing of seasonal and year-round beers and for information on distribution, visit Schlafly.com.