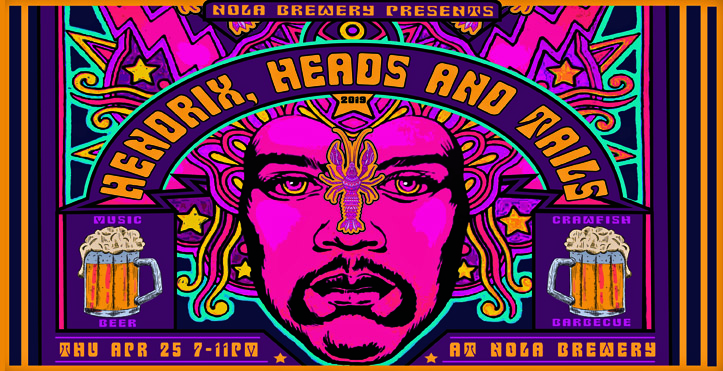 “This is our favorite time of year thanks to the incredible musical talent that comes to the city for two weeks,” says Dylan Lintern, COO of NOLA Brewing. “The brewery has always had a strong connection to music, and we want to celebrate it the best way we know how, with a music event of our own bringing the funk and, of course, crawfish.”

“Hendrix, Heads & Tails” will take place at NOLA Brewing, 3001 Tchoupitoulas Street. Doors open at 6pm with fresh, hot boiled crawfish and the party will last until 11pm. Gravity A with Cliff Hines will kick off at 7pm and the all-star tribute to Jimi Hendrix kicks off at 9pm.

NOLA will be serving a wide variety of standard and specialty NOLA beers, as well as releasing a couple specialty brews for the event, including a release from the NOLA Funk Series.

Early bird pricing is $10, general admission is $15 and tickets will be sold at the door for $20 on April 25th if available. Get your tickets early – once capacity is reached, no additional tickets will be released. McClure’s Barbecue, hot crawfish and draft beer will be available for purchase in the Tap Room. Parking is available in the NOLA Brewing parking lot behind the Tap Room. Must be 21+ to attend.

Nola Brewing Company crafts beer for introductory craft beer drinkers AND the experienced craft beer lover. The company’s passion for quality and crafting beers that they themselves want to drink translates into great-tasting beers, made from choice malts and hops brewed with over 40 years of experience. However, the company goes beyond just developing great beers. Heavily entrenched as a thread in the fabric of New Orleans, NOLA Brewing Company brews a cultural experience within each glass. NOLA Brewing is located at 3001 Tchoupitoulas Street in New Orleans, LA