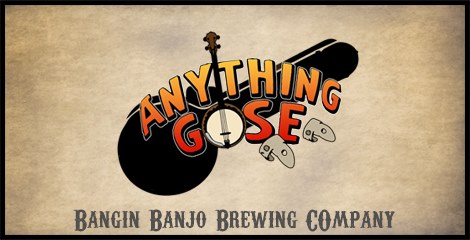 The Anything Gose is our annual sour beer fest with over 50+ different beers with 30 different Bangin’ Banjo goses. We will have food trucks, music, and guest beers from other breweries. You can expect many older favorites and many newer goses, as well as many of our barrel aged stouts and other beers!

This year we are offering our Chardonnay Barrel Aged Tiny Guitar and Zinfandel Barrel Aged Cover Band in 22oz bottles for $20 each. You can purchase your bottles through Eventbrite or inside the tap room until 12 pm the day of the event. You’ll until the end of January to pick them up after the event if you choose to purchase through Eventbrite.

This will be an All You Can Drink Event only and will not be open to the public. There is only General Admission, as we have limited this event to a maximum of 500 people. Tickets will be $40 each and include a Limited Edition Anything Gose glass to enjoy the beers with and take home. Tickets will be $50 at the door if any are left.

There will be different ticket options, including the option to pre-buy up to 2 of each bottle prior to the event. We are limiting a maximum of 2 bottles of each brew per person. Make sure to select the appropriate ticket option when you purchase your tickets. If there are still bottles available after all pre-orders have been placed, they will be for sale during the event.